Maui, State XC Meet with Broken-Legged Runner, Halloween in Lahaina, and a Wedding in Hilo

Somehow, my son has become a running maniac who had been doing well in his freshman season in BIIF cross country. Then, one Saturday in September, he broke his leg.  He was playing soccer with his club team.  Accidents happen.  They suck, but they happen.

Even though my son wouldn’t be running, we still went to Maui to cheer on the Big

After arriving on on Maui, we went straight to to pickup essentials at Costco, which was right next to our hotel. We got a case of water, beef jerky, mac nuts, poke, sushi, and a bottle of wine. All set for my brother’s arrival from Oahu.  We checked in to the Courtyard Marriott at Kahului Airport.  Turns out this is the same hotel the Hilo High XC team (and maybe almost every other non-Maui and at least one Maui team) booked. The hotel was clean, comfortable,

and nicely furnished. Its convenient location next to Costco, Krispy Kreme, and the airport make this the ideal hotel for us.

We ate our first meal of the weekend at Da Kitchen in Kahului.   The kimchi crab cake was crispy and had great flavor. The serving size of the entrees were generous. My daughter’s steak was very tasty and nicely done.

We left early the next morning for Seabury Hall in Makawao where the state cross country meet was held. In the minutes prior to the start of the meet, I shed a few tears as I thought about how my son would have/could have been running today. The tears quickly stopped as the excitement and drama commenced once the meet started. Big Island male standouts were Louie Ondo from Waiakea High who finished in second place overall, Cody Ranfranz from Konawaena High in eighth place, Ziggy Bartholomy from Kealakehe High in ninth place,  and River Brown from Hilo High in tenth place.  If my son had run and had posted the kind of times he was running earlier in the season, he would have been the top freshman finisher in the state and would have finished in the top 20 overall.  We are looking forward the next cross country season! In the female division, Saya Yabe, a junior from Waiakea High, and Sam Marrack, a freshman from Hilo High, were the top two Big Island finishers.  What an exciting meet. Can’t wait to see them run next year!  Great job to the Big Island runners!  Congratulations to the Hilo High Vikings!!! 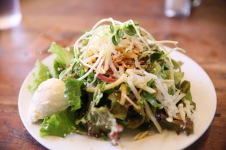 After the race, we were hungry for lunch. We wanted to go to Hali’imaile General Store but found out they were not open for lunch on Saturdays. We ended up at Flatbread Company

in Paia and had a delicious organic salad and crispy, tasty flatbread pizzas.  After lunch we stopped for dessert at the well-known Tasaka Guri Guri. Flavors of the day were pineapple and strawberry. 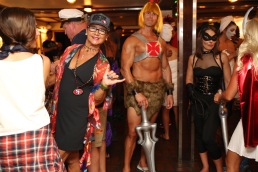 Next on the agenda–Halloween in Lahaina! This is the people-watching spot to be if you are on Maui for Halloween.  The costumed revelers were friendly and fun!  We had dinner in Lahaina at Lahaina Fish Company where I ordered the paella you see pictured here.  I was surprised to see what was served to me since paellas tend to have some crispy rice and have a darker coloring from the saffron, but I love seafood and ate it up anyway.

The next morning, I woke up early and made it to the hotel fitness center for a quick workout.  The fitness center was clean and seemed furnished with new equipment. My brother and I then walked to Krispy Kreme to partake of the famous hot and fresh donut. It was worth the calories. I’ve never had the donut as it came straight off the donut line. Wow–it was a light, fluffy, sugary cloud. Big difference from the donuts that have been sitting out for a while. If you have a chance, get the hot and fresh donut. You’ll be addicted to it at your first bite.  (You can see my video on our Facebook page–Living Hilo Style.) Next, we s

topped at Home Maid Bakery on Lower Main Street to pick up some manju omiyage for our gracious dog sitters.  We selected the coconut, deluxe an, and the apple manju.

The last Maui meal was a bbq brisket and baked beans plate from Whole Foods.   Everyone gets what they want from Whole Foods–daughter had sushi and salad, son had orange chicken, the adults all had the brisket.

It was a great weekend and I was tired, but we had one more very special thing on our weekend agenda.  We were blessed and honored to be invited to celebrate the wedding of Bill and Paulette. (FINALLY!  These two awes 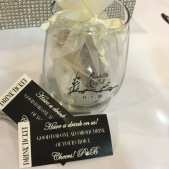 ome human beings got married after being together for around 20 years!)  What a fun wedding reception with good friends, awesome music, and good food. I saw a friend whom I hadn’t seen for about 20 years!  Do any of you recognize Jorma?  He now lives part time on Oahu and part time in Nagoya, Japan